Petrov Evgeniy Nikolaevich was born in 1956 in Yaroslavl. In 1975 he graduated from Yaroslavl academy of music n.a. L.V Sobinov.
After serving in the Soviet Army he studied at Glinka Nizhny Novgorod State Conservatory, at trumpet division of professor S.A.Shakirov (1978-1983). At 1983 he won a State competition in Saratov, and since 1984 continued his education as assistant-trainee under the management of professor V.N.Dosadin. 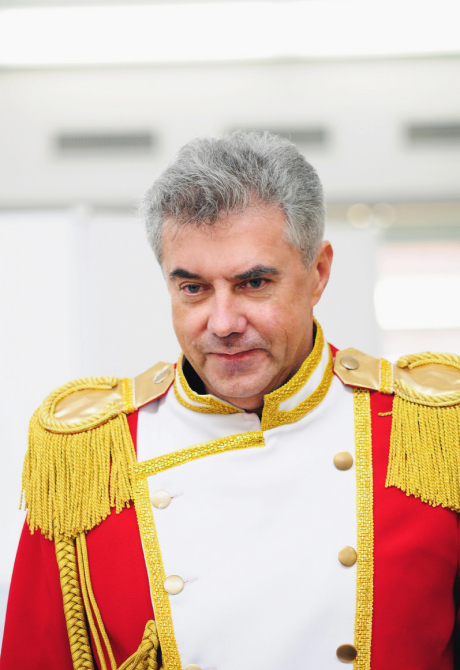 Being a student of State Conservatory, Evgeniy Petrov was also a soloist of Academic symphonic orchestra of Nizhny Novgorod philharmonic, where he worked for 17 years (1981-1998). During this time he proved himself to be a wonderful musician, manager and leader. It was his initiative to create a Brass quintet in 1984, which included the best musicians of the philharmonic orchestra. For the years of its existence, the Brass quintet has successfully performed at russian and foreign stages with various programs of different periods, styles and directions.
The great creative potential and will to enrich the cultural life of Nizhny Novgorod has led E. Petrov to creation of “Nizhny Novgorod Governorate Orchestra”. His personality allowed to unite musicians of different generations and interests, so he is the all-time leader, artistic director and head conductor of the orchestra. Under the management of E.Petrov the Nizhny Novgorod Governorate Orchestra has participated multiple times in International and Nationwide festivals, and has also become the Winner of Nizhny Novgorod Award, Gran-Prix of Nationwide and International competitions.
Evgeniy Petrov successfully combines his work at the Orchestra and ASO with teaching at trumpet class in Glinka State Conservatory (since 1983). Graduates of his classes work in Russia and abroad, many of them are the Winners of Nationwide and International competitions, soloists of the leading orchestras. Since 1994 E.Petrov has been a head of the Brass and Percussion Instruments Department in NNSC n.a. Glinka. Professor since 2005. During many years he sits in a jury of Nationwide and International competitions and festivals.
As a recognition of E.Petrov deeds he was awarded with the title of Honored Artist of the Russian Federation. His active creative state attracts new musicians for partnership, allows to bring to life great ideas, related to popularization and development of wind art and performanship.
Activity of artistic director of Nizhny Novgorod Governorate Orchestra is highly appreciated by the people of Nizhny Novgorod. In 2014 and 2018 E.Petrov won independent regional “Person of the year” award by “Delovoy Kvartal” magazine in “Person of the year in socio-cultural sphere” nomination, and also the “TOP 50. The most famous in the city” award of “NN.Sobaka.ru” in “Music” nomination.
On May 27th, 2017, The Legislative Assembly of the Nizhny Novgorod Region decided: for outstanding personal merits in a field of activity socially significant for the entire Nizhny Novgorod region aimed at the benefit of the population of the region, to confer the Honorary title “HONORARY CITIZEN OF THE NIZHNY NOVGOROD REGION” to Petrov Evgeniy Nikolaevich.